Give Windows 8 the traditional start button you've been missing 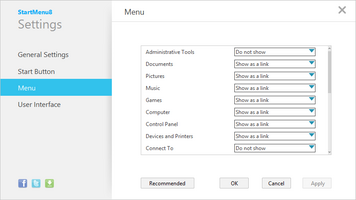 Advertisement
Windows 8 and 8.1 came without the traditional start button from earlier versions of the same operating system, so some users had some trouble accessing certain features and options to which they were accustomed. Start Menu 8 is perfect for all those people, since it brings the original start button back, putting it in the same place where it has always been, with the same appearance it had in previous versions.

Start Menu 8 modifies the more modern Windows interface, allowing the computer to boot directly to the previous operating system image. Your PC will have the same appearance as Windows 7 but with all the features of the newer version.

Although this program is intended to restore the start button on Windows 8 and Windows 8.1, it can also be used with Windows 7, XP, and Vista if you want to change the start button in those, too. From the application’s settings, you can make the button look more than a dozen different ways, including the system icons and other fun shapes like a little pig, or a V for Vendetta mask.
Translated by Taryn
Advertisement

Technology is up, zman kezman, now it may be ok, just still, it will be successful, thanks